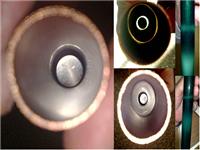 For note, the direction of induced current could also be explained by Fleming’s Right-Hand Rule (mainly used in Generator current prediction).

To assist with demonstrating Lenz’s Law, we offer both the magnets to fit 15mm and 22mm diameter copper pipe plus kits consisting of magnets plus copper pipe.