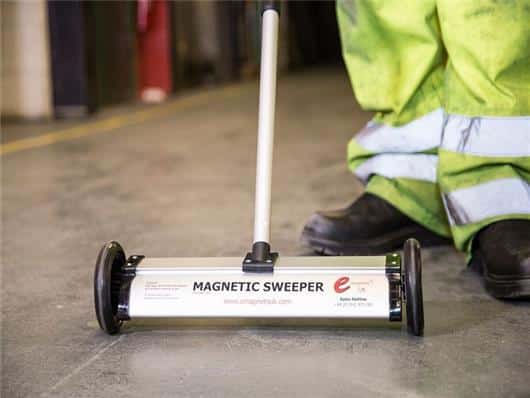 The sweeper is of stainless steel construction, fitted with two large robust rubber wheels with puncture proof-tyres. The long tubular steel handle can be removed for transportation. The handle also contains the release mechanism for allowing collected debris to be dropped into a bin with a simple pull of the mechanism. Fully extended height 1100mm. Length 100mm. Width 400mm. The width of the magnetic head itself is 350mm with the magnet system inside capable of lifting up to 5kgs of metal debris.

To pick up ferrous debris, fully extend the handle and twist to lock in an extended state, then simply roll the Hand Held Magnetic Sweeper over the area to be cleared – it really is that simple! And removal of the collected debris from the sweeper is also easy. The debris can be collected, taken to a bin and released into the bin with no need to have fingers touching the debris.

There is a black plastic collar on the handle shaft which is the release mechanism. This black collar is pulled upwards towards the end of the handle (there is an arrow on this collar showing the direction to be pulled). Pulling the collar causes the magnets inside the sweeper to be physically moved away from the collection surface creating an air gap which reduces the magnetic attraction forces on the collecting surface – the ferrous debris is no longer held with such force and falls away from the surface by gravity. When the collar is pulled the release mechanism is activated and the magnetic pull is said to be ‘turned off’ – it isn’t really off; the magnetic circuit direction has changed so less pull is noticed at the surface. Very fine debris may still remain on the surface of the sweeper due to retained magnetism but these can be easily wiped away if required (they will not affect the performance of the unit). When the release mechanism is deactivated (by allowing the collar to fall back down) the magnetic pull is fully functional again at the collection surface and the unit is ready to collect more ferrous debris. The process of releasing debris and getting the unit ready to use again is quick and simple – it can be done in under ten seconds.

The Hand Held Magnetic Sweeper requires no external power to operate – permanent magnets provide all the performance. Ferrous collection is fast and simple to perform. 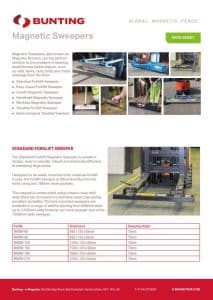