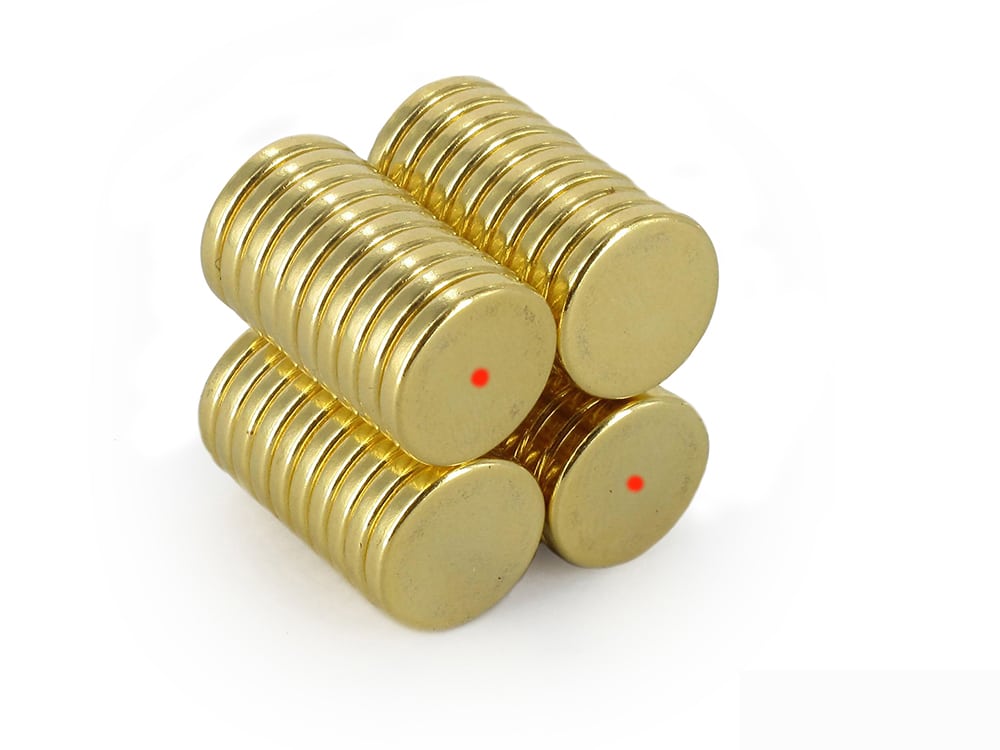 These Magnet Therapy magnets are often referred to as Pain Relief Magnets – they are high grade Rare Earth magnets. They offer a flux density of up to 3,500 Gauss on the surface (different shaped magnets give different magnetic field outputs). The disc should be positioned over the site of the pain and held in a position with a piece of surgical tape. Each Magnet Therapy disc has a red dot on one side which indicates the North pole. It has been suggested that the North pole should be pointed towards the body for maximum benefit. The North pole face is sometimes also called the positive face in magnet therapy texts. The magnets used for Magnet therapy are 22K gold plated to protect the skin.

The evidence to demonstrate the mechanisms by which magnets work on the human body for pain relief is not totally clear. Some people highly rate the use of magnets and claim to have experienced positive results from the use of magnets. Others claim to have had no benefit from their use. We are not aware of any reports suggesting detriment to health from the use of magnets – for example, strong magnetic fields are used in MRI systems at hospitals (but please note that people who use pacemakers must not use magnets as the magnetic fields can cause potentially fatal malfunction of their pacemaker) [1]. Magnets should not be a replacement for any medication prescribed by your doctor – if in any doubt you should always consult your doctor.

Some people use magnet therapy on their animals and have claimed that the animals have shown improved mobility and health. There is also research work being carried out by Universities into the use of magnets for targeting the application of medicinal compounds. In simplified terms, the active chemical of the medicine (the chemical that helps to ‘heal’ the person) is made to have a high permeability (materials with high permeability are easily attracted towards magnets e.g. iron). When the active chemical is in the blood stream it is attracted to a magnet placed against the skin (against the area where treatment is needed) and builds up a concentration near the magnet (a bit like how a magnet would pick up iron filings from a moving conveyor belt). This method of build up of active chemical in a localised region of the body by magnets is being researched by Universities as a novel way of administering medicine [2, 3, 4, 5]. Universities are also investigating the use of magnets in other forms of medicine and biochemistry. Magnets are already used in medicine. For example, the way in which cells and tissues of the human body react to magnetic fields is the basis of MRI scanning machines [1, 6, 7, 8].

It is suggested by some that magnets should be placed with the North facing the skin and that South facing the skin works differently. We do not know if this has any scientific merit. The magnetic field leaves the North pole face and ‘travels’ back around the outside of the magnet to enter the South pole face. If placing a magnet with the North pole face down against the skin, the magnetic field travels through the skin and around the outside of the magnet in the opposite direction (akin to a weaker virtual South pole on the skin around the magnet) – this would suggest that, if magnets work for pain relief, which way around it is placed should not really matter. For note, some people refer to magnet pole faces as positive and negative which is interpreted as North and South respectively although, strictly speaking, such positive and negative terminology is incorrect. It is also suggested that the strength of magnetic field is important and that fields that are too strong do not work as well. We have no evidence either way to confirm or oppose such a theory. There is currently not enough research in the area of magnets in medicine to correctly define how magnets could assist in pain relief.

The effects of magnets on materials (solids, liquids, gases) can be explained scientifically by reviewing the basics of magnetic theory as would be found in any good degree level Physics / Engineering text book. Using such correct theory sheds light on how magnets can affect the human body. The ability of a permanent magnet to attract a material depends on the magnetic permeability of that material. Every material will either attract to or be repelled by a magnetic field (even if the effect is very small) [7, 9, 10] (materials viewed as “non-magnetic” do interact with magnetic fields but the effect may be very small). A magnet will strongly attract materials which are classified as ferromagnetic (e.g. iron, cobalt, nickel and mild steels) and ferrimagnetic (barium ferrite), both of which have permeabilities significantly above 1. Materials classified as diamagnetic (e.g. copper, gold, water) are actually weakly repelled by strong magnetic fields (they have a magnetic permeability slightly less than 1). Materials classified as paramagnetic (e.g. aluminium, air and oxygen) and antiferromagnetic (e.g. chromium) are actually weakly attracted by strong magnetic fields (they have permeabilities slightly above 1). Most human tissue is classified as either diamagnetic (e.g. haemoglobin / deoxyhaemoglobin) or slightly paramagnetic (e.g. oxyhaemoglobin) as highlighted in Figure 1 [1, 8]. Please note that, simply because a material contains iron, it does not mean it will be readily attracted to a magnet (e.g. 300 series stainless steels). Also, the term susceptibility is sometimes used instead of permeability. Subtracting 1 from the permeability value gives the susceptibility value and this is used to simplify comparing materials with a permeability near to 1.

It would therefore be a hypothesis (from an Engineering perspective) to suggest that a magnetic field against the skin will cause a level of interaction with the human tissue that the magnet is against (a hypothesis is a statement that tries to explain a set of facts, events or principles, usually forming a basis for possible experiments to confirm how viable/true that hypothesis is – a hypothesis can be correct or incorrect). The bloodstream (blood vessels) carries oxygenated blood to the tissue to release oxygen to the tissue and to take carbon dioxide away in de-oxygenated blood (human tissue is a collection of cells forming a definite kind of structural material with a specific function). Nutrients that flow in the blood stream’s plasma ‘feed’ the interstitial fluid surrounding the tissues of the body. The magnetic field from the magnet is a static field. Charged ions and charged particles moving across the magnetic field (due to moving in the blood stream or moving in the interstitial fluid) will be deflected by the magnetic field causing a possible small localised ‘turbulence’. If the change from oxyhaemoglobin to leave haemoglobin (for releasing oxygen to the tissue cells) is a change from a paramagnetic to a diamagnetic material, then the haemoglobin and oxyhaemoglobin will interact with the magnetic field by being gently pulled and pushed away from the magnetic field causing another possible small localised ‘turbulence’. This hypothesis also proposes that these two ‘turbulences’ could create localised pressure build in the area of tissue around the magnet and this may have a positive effect on the rate of transfer of nutrients to the tissue. This hypothesis assumes that the increase in pressure and turbulence allows the already naturally ‘leaky’ blood vessels (this is how nutrients and oxygen is transferred from the blood stream) to be more effective at passing on the nutrients and oxygen to the cells in the tissues aiding in tissue repair and therefore in pain relief. Whether this hypothesis is true would need testing. It would require University/Hospital studies to determine exactly what is going on. A definitive, logical and plausible explanation from truly independent and respected Universities and Hospitals of the effect of magnets does not really exist.

For note, the magnets are gold plated to minimise allergic reactions (as may happen with the Nickel plated NdFeB magnets). Gold is chemically inert making it ideal for medical applications. Nickel plated magnets can be used instead but bear in mind the possibility of an allergic reaction to the NiCuNi plating.

SKU: N/A Category: All Other Magnets